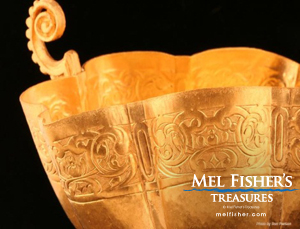 Bernegals were drinking vessels that were popular in Hispanic society in the 17th century ours is a footed example and may indeed be a match for the wonderful footed plate or “salver” that was found in 1980 and is on display in the Mel fisher Maritime Heritage Society. The set of Salver and Bernegal are offshoots of the medieval convention of royalty worrying about their safety. The salver was used by the head server in a royal household to test drinks and food to assure that the master of the household was not about to be poisoned, or as the Spanish at the time termed it “salvo de toda traiciÃ³n y enagaÃ±o” or “safe from all treachery and deceit”. In fact from the sister ship of the Margarita the Nuestra Senora de Atocha we found a bernegal that had inside a cage inside to hold a “Bezoar stone” Which was used to ward off poison also. However the salver to the Atocha example has yet to be found- another fine target to be on the lookout for on these wonderful wrecks! These salvers and drinking vessels or bernegals became very popular in the seventeenth century

Comparing the two pieces the design similarity can be readily seen.

Salver from the Margarita Design on the Margarita bernegal

The Bernegal itself has the following specifications:

Note: Cup is not round. It had been partially compressed during initial wrecking process.

Notes:
2 Tax Stamps
Base screws off

Executed in the “bocado style” (this style is characterized by an undulating divided in to vertical lobes) it has a lobed everted-circular form, having a wide conforming border chased with a stylized scrollwork design. Foliate ornaments have been interpreted geometrically into two C’s on each lobe resembling blossoms. In the angles between the scrollwork garlands with little flowers and fruits dangle and intersect this appears above eight deeply-conforming lobes, the interior having a family crest or heraldic symbol, scroll form handles surmounted by raised nodules, cup sits on a molded spool foot. Traces of two stamps are visible on the base.

The cup bears some resemblance to the “Poison Cup” of the Nuestra Senora de Atocha, 1622, in that it has two handles, is decorative, footed and made of gold. The interior of the Santa Margarita cup is markedly different from that of that Atocha example. The interior base of the cup is surmounted by what appears to be a family crest or heraldic symbol. This wonderful design is currently under research by Eugene Lyon, PhD and associates in Spain who are very hopeful of identifying a family associated with this design and to whom aboard the
Santa Margarita this magnificent object once belonged.